Deep inside your VS installation (%VS installation%\Common7\Packages\Debugger), hides a bag of goodies called autoexp.dat.
It is only semi-official, and almost entirely undocumented. Andy Pennell confesses its his fault,  but I suspect there’s more to it.  Admittedly, its still (as of VS2008) fragile, can easily crash the IDE, subject to the dreaded ‘syntax may change’ disclaimer, and generally half baked.   All that being said, its probably the best productivity-enhancer I came across in the Visual Studio universe.

Lacking official documentation, Avery – creator of the VirtualDub video editor/converter – did a spectacular  job of reverse-engineering it (1, 2) .

autoexp’s prominent feature is customization of native variables watch, both as tooltip and in watch windows. Ever wondered how STL containers are wired to the IDE?    How come STL vectors show their contents automatically, but native arrays require manual work? 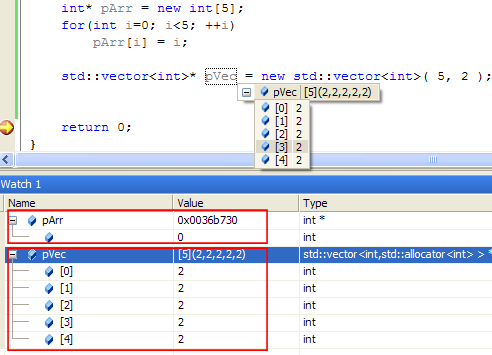 Wonder no more – the wiring is done by autoexp. If that sounds even remotely useful to you, go read Avery’s posts now.  You’ll never watch arrays, lists or hash tables the same way again.

now off to a first tweak using autoexp.

Suppose you have a Direct3D-like matrix type:

and the IDE isn’t doing a very good job of helping you grok its contents: 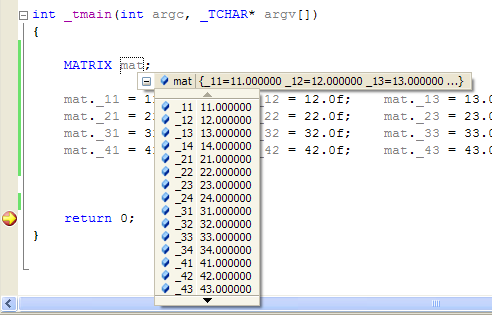 Fear not!  Declare a MatrixLine type, then re-declare the matrix as a union with an array of MatrixLines:

In autoexp.dat,  under the [Visualizer] section – define a preview for each MatrixLine, and set the Matrix watch to show its MatrixLines: 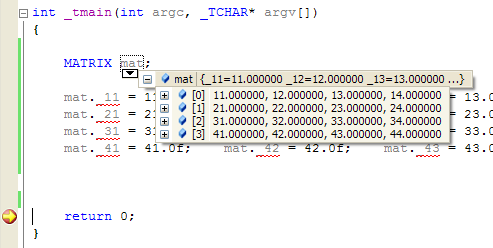 This entry was posted in Debugging, Visual Studio. Bookmark the permalink.