Last time I jotted down some equations suggesting how you should understand 3d matrix inverses, or how to solve 3×3 equations. Below is a first application, for obtaining barycentric coordinates.

Barycentric coordinates are the canonical way of describing a point within a triangle (or more generally, within a polygon, or just any convex point set). Briefly put, suppose you’re given a triangle with vertices A, B & C, and an interim point P: 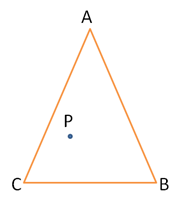 P’s position relative to A, B and C can be described by a set of 3 scalars, say α, β & γ, called its barycentric coordinates:

For P to lie in the plane formed by A, B & C these ingredients must satisfy –

And for P to lie within the triangle, they must satisfy –

You can think of these equations as describing a recipe for cooking up P from the ingredients A, B & C: α as the amount of A you need to put in, β the amount of B γ of C. These coordinates are very useful, for example, for interpolation: quantities that are stored for A, B & C can be mixed with the same coefficients and applied to P.

Now how do you actually find barycentric coordinates? Well, the equation defining them can be rewritten in matrix form:

Which gives a still-not-very-explicit expression for the coordinates:

The derivation in the previous post gives a way to deduce expressions for each coordinate. Say, for α:

Finally, a correction of an apparently common misconception. I’ve heard a few times the interpretation of barycentric coordinates as a expressing distances of some sort – it is indeed tempting to think that if α is close to 1 then P’s distance from A is small. That just isn’t true. For example in this setup –

A is the triangle vertex closest to P, and still the α coordinate is zero – as low as it can get. When ‘cooking up’ P, we have to mix in only B and C – with no A at all.

This entry was posted in Uncategorized. Bookmark the permalink.